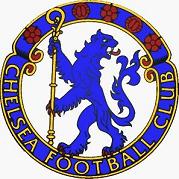 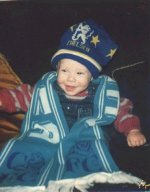 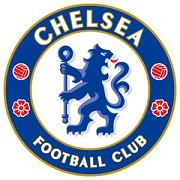 An early photograph of my daughter Danielle, who was obviously more than happy to pose in the blue (and jade !?!) of Chelsea, without any hint of exploitation.

Ironically, when I finally succumbed to Fuzz's continual nagging to go and watch the mighty Chelsea FC at Stamford Bridge, the team had only recently survived sinking into the abyss that was the *old* Divison Three. I hadn't seen much football over the past few years but I certainly much preferred watching football played on grass rather than that awful old plastic !

Back in late 1983, my good friend Fuzz mobilized a half dozen "Southall Crew" in the White Wall section of the Shed. Fuzz, Slum, Rodney, John, Steve & myself revelled in watching John Neal's new Chelsea. With Dixon, Speedie, Nevin up front, Eddie in goal, big Joe & Pates as centre backs, old John Hollins and Joey Jones as full backs and Spackman, Bumstead and Canoville in the middle. Into 1984 and Mickey Thomas came in to boost the midfield, Colin Lee took over the right back slot from John Hollins & Chelsea powered on into the top flight.

Many thanks to those folks at www.cfcnet.co.uk for printing my Kalamata story