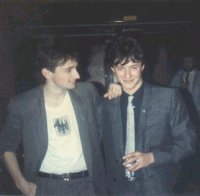 As the 1983/1984 football season commenced, I was still doing my Saturday job but Chelsea's opening day 5-0 victory over Derby County was making the headlines, especially as the Rams were hotly tipped for promotion. So, a couple of months into the season & Fuzz was starting to rave about the new Stamford Bridge wing wizard - wee Pat Nevin.

Mr Nevin also made the pages of the NME and was surely the first football player in the history of the game to have a decent music taste. Okay, the Jesus And Mary Chain were a tad overrated but the Cocteau Twins aural beauty graced my turntable for many years.

I was only able to make a handful of games (mainly midweek) during that season, but I knew that, football-wise, I'd found my spiritual home. Again, I missed out on the 5-0 mauling of Leeds United (with all the ensuing chaos) but witnessed the twist & turns of the last home game (3-1 vs Barnsley) where two dramatic late goals kept (already promoted) Chelsea on course for the Second Division title.

So the "84/85" season kicked off just after I started full time employment & we all headed off to a hot & sunny Highbury. Somewhat groggy from Friday night's party, the clock end was mighty packed & everyone went mental as Kerry Dixon lashed home at our end to earn a 1-1 draw.

My shifts at work meant I missed a couple of home games but even a Friday night late shift didn't stop Fuzz & myself heading off for St James Park, where we lost 2-1 - a rather long day ! Home form was solid but the Blues saved the "first away win" until 3 days before Christmas, where soaked to the bone at Goodison Park, we celebrated a glorious 4-3 win over Everton, with a classic Gordon Davis hatrick, despite the Toffeemen scoring two dubious penalties in the last 5 minutes.

It was a memorable season (a classic 3-1 league victory over Liverpool & the epic Milk Cup saga vs Sheffield Wednesday standing out) but Dixon & Speedie's goalscoring exploits weren't the only things making the headlines. I guess nobody will ever forget the *aggro* that blighted the club and amongst numerous skirmishes that season the great Milk Cup run ended in utter chaos, as old boy Clive Walker's breakaway equaliser sealed our fate at The Bridge. By the time it became 3-1 to Sunderland, I'm not sure how many supporters were still watching the game (as opposed to the running battles and the "Fatman" attempting a slug at Walker in the centre circle) and there was barely a audible cheer as Pat's late lob made it slightly more respectable at 2-3 on the night (2-5 on aggregate) but a month or so later, as Chelsea celebrated it's 80th anniversary, all the talk was about the possibility of "electric fences" !?!

By the summer of 1985, admitting to being a football fan was akin to being a social leper after Millwall had rioted at Luton & the Heysel Stadium disaster had claimed many lives. Meanwhile, at Chelsea, supporters eagerly anticipated the start of the new campaign as John Neal moved upstairs and the ever popular John Hollins was installed as the new Chelsea manager.

Chelsea started well and lost only one of the first nine games - after a couple of small blips Chelsea went 11 League games unbeaten (of which they won 9 and of the other two included a richly deserved last minute Pat Nevin equaliser at Anfield, which prompted me to get the match ticket autographed at the subsequent Chelsea FC Dinner/Dance that December) before fate conspired against the Blues as Kerry broke down in the televised FA Cup tie against Liverpool & we were dumped out of the 2 major cups at home within 4 days. Even then, with a chance to take the top spot in the League, Chelsea (sadly with both Dixon & Speedie ruled out) dropped 5 home points as they drew 2-2 with Leicester and then shockingly capitulated 1-4 to lowly Oxford. A minor recovery kept Chelsea in the hunt until the inaugural Full Members Cup Final at Wembley where rampant (but Dixon & Eddie-less) Chelsea (leading 5-1 with 5 minutes to go through a Speedie hatrick and a Colin Lee brace) hung on for a nailbiting 5-4 victory. Now comes the funny bit ...

After safely bagging the Full Members Cup (hurrah !) we entertained West Ham, who themselves were riding high on the goals of Cottee and McAvennie. It was a total disaster and we were stuffed 4-0. Still shaking heads in disbelief, we headed off to Loftus Road on the Easter Monday where things went from bad to worse. A shocking 6-0 reverse is still fondly remembered for all the singing "we're gonna win the league, etc" and David Speedie's blatent late foul which received an automatic red card. It made you proud to be a Chelsea fan as the Rangers mob were drowned out. A season that finished in 4 straight defeats (ending with Les Fridge's amazing debut, conceding 5 at home to Watford) may have been taken a bit more seriously had we not all been banned from European competition but had two corking moments. Firstly, Dixon's double at Old Trafford screwed up United chances then the ultimate revenge when the Upton Park return fixture (rescheduled from frosted out New Year's Day) ended with a far past wee Pat header that ultimately destroyed the Hammers championship pretensions as the Blues ran very late 2-1 winners. Oh, how we mobbed the Blues coach on the way back to the station !

Over the summer of 1986, my personal circumstances changed somewhat as firstly Deborah and myself got married, then a week before the new season my daughter Danielle was born. This did not stop me from going to see Killing Joke headline the Friday night at the Reading Festival followed by an opening day 0-0 draw vs Norwich at the Bridge. Despite an early televised 1-0 win at Old Trafford & a truly memorable Hazard inspired 3-1 win at White Hart Lane, where the incessant rain rendered our Chelsea Collection gift watches broken but our spirits anything but, the good ship Chelsea was in choppy waters. Already, we had seen several bad defeats (a brief 2-1 lead over the Forest turned into a 2-6 defeat but thankfully I was not present as Dougie saw red and the Blues crashed 0-4 to Wimbledon) and Chelsea hit the basement in December before the battling Blues started a major recovery at The Dell on Boxing Day. The final home game against Liverpool was a 3-3 ding dong and Chelsea finished 14th (out of 22nd) but now with kit makers Umbro now on board, thankfully no more of that Chelsea Collection malarkey.

During the summer of 1987, I moved my young family up to Peterborough. It was ultimately a naive decision, but you can only learn from your mistakes. It meant that I would be able to make few away games, but we scheduled trips to London to coincide with home games, as much as was possible. Six weeks into the new campaign and Chelsea reached a lofty position of 2nd. Eddie got badly injured again in late October and this, above everything, seemed to knock the stuffing out of Chelsea. The strange thing was that, in a doomed season as 87/88 was, I saw very few defeats. Hardly surprising that, as we only lost 2 home games all season !?! It was crazy, absolutely crazy. Not only were Chelsea the only team to be relegated via the short-lived play offs (yes, all the other Division One teams survived) but we only lost 2 of 20 home league games, YET WE WERE RELEGATED. Nearing the final strait, and with my family safely back in West London rueing the "Peterborough effect" I vividly remember the manic celebrations in The Shed as Micky Hazard volleyed past Shilton (vs Derby) as Chelsea gained a vital and overdue 3 home points. The real problem was 11 home draws, and that carried on (vs Liverpool) with John Barnes late dipping 30 yard free kick and (vs Charlton) with Paul Miller's inprobable loop home at the Shed end on the final day of the season that comdemned us to the Play Offs.

Even the odds, of a team winning 3 out of 4 play off games but not progressing past a team that only won 2 of 4 games, must be high but it happened. After the 6-1 aggregate victory over Blackburn Rovers (including a fine 4-1 victory at the Bridge), we expected to make it but a 2-0 reverse at Ayresome Park left a cloud of apprehension hanging over Stamford Bridge. Far too much for me, I'm afraid and I headed off to the Air Fete at RAF Mildenhall, convinced of our fate. By 3pm I was glued to the car radio and Durie's early strike raised the spirits, but the feeling of inevitability returned ... too good to go down ?

I was upset that I missed Pat Nevin's last official game for Chelsea FC although thankfully he put on a Chelsea shirt for a final time at the Colin Pates testimonial game (vs Spurs), just before the start of a new (and very uncertain) Division Two campaign ... blimey, when would the Shed be open again ?