*****
"The Story Of The Plane Spotters" by HMK Skinner
(a personal view of events from Epping's intrepid junior reporter, Helena Skinner - then aged 7 & a bit !)

So, if you don't know me personally, you may not be aware that I am one of the infamous "Kalamata14". A group of British and Dutch aviation enthusiasts who were bizarrely arrested on 8th November 2001 at a Hellenic Air Force Open Day at Kalamata AB - originally we were accused of taking photographs in a restricted military area (even though our cameras were locked up in the mini-buses !?!) then even more bizarrely we were later charged with and then convicted of espionage at the trial (which was held in the quaint southern pelopennese town of Kalamata during April 2002), even though we had written permission from the Greek AF HQ to attend the Open Days (these "events" were previously only open to Greek nationals until approximately 1998) and we were only freed again on bail, after being advised to lodge an appeal, and allowed to travel back to the UK pending an appeal hearing.

I am one of the 8 aircraft enthusiasts (or "spotters" if you must) who was handed out not only a conviction for espionage but also given a three year prison term by the Greek court in Kalamata. The other six "spotters" were given one year suspended sentences as their "role" was described as that of "aiding and abetting" espionage. Ludicrous. This verdict may be designed to put out a strong message to other aircraft enthusiasts who might wish to visit Greece in the future but a simple "no, you are not welcome here" response would have been sufficient, do you not think ?

Obviously we hoped that the convictions would be quashed as we felt that the whole incident was initially triggered as a result of overzealous security personnel who, after the arrest at Kalamata, felt unable to back down without losing pride. Then more recently, after reading a translated to English copy of the transcript from the trial, it appeared that the major push behind the convictions was coming from the Greek AF HQ themselves, if not from the Public Prosecutor.

This whole incident had soon got wildly out of hand and unfortunately we were stuck within the Greek judicial system. Though this saga took a whole year out of our lives, with the obvious stress for all our families, we have to be thankful that things moved with the speed they did. Without any intervention, we may not have reached the appeal stage until some time in 2004 though, of course, we would rightly argue that these "espionage" charges should never have been brought in the first place. The trip in November 2001 was organised by Touchdown Tours as an authorised trip, having first sought permission from the relevant Greek authorities, to attend the annual series of Open Days held at all Hellenic Air Force bases from 8th November (which is Saint Michael's Day - the patron saint of the Hellenic Air force) until the following Sunday. The remainder of the time in Greece would mainly be spent visiting various "wrecks and relics" sites or museum collections to view Greece's vast array of preserved aircraft.

Reports suggest that some 50,000 UK citizens are arrested abroad each year, which puts the media attention on own case into perspective. The "Kalamata" incident not only resulted in discussions between various ministers of Greece and the UK, but more crucially the respective Prime Ministers. On the lighter side, we even made several episodes of the popular BBC satirical show "Have I Got News For You ?" and there was a side splitting moment on the BBC Radio show "Dead Ringers". I have an MP3 of this available for your aural pleasure - please right click here and "Save Target As" to download. Enjoy.

I'm not quite sure what my late father Zygmunt (who died of lung cancer in September 2000) would have made of all this but the struggle for survival his family faced when deported to Siberia from Eastern Poland in 1940 always made my current situation pale into relative insigificance.

Having been born in Southall, 4 miles out, under the flightpath to the "cross wind" runway (23) at London Heathrow and growing up also within a 2 to 3 mile radius of RAF Northolt, I had cultivated an interest in aviation for as long as I could remember. Back in 1976, at the age of 11 I became aware of the planespotting hobby & spent much of the summer up at LHR airport.

It might seem a bit odd to people why we spent so much time looking at aircraft but maybe it was a "generation" thing - there were no videos or computer games to occupy our time. After starting off at Heathrow, Gatwick, Luton and Northolt, the scope of the hobby was broadened (with the help of an under-16's cheap Golden Rover ticket) firstly via other civil airfields (Redhill, Biggin Hill, Denham, Elstree, Leavesden etc) then to the military airshows and airbases which were far more interesting, albeit somewhat more difficult to get to. My own interest in aircraft spotting waned considerably during late 1979 as I began to spend much more time on "going out", music and football activities.

Into the 1980's and I was turning into a bit of a vinyl junkie as music was again my life, especially bands whose sound and lyrical content echoed the madness of the nuclear age and escalating arms race, such as Killing Joke, Crass and Discharge. By 1982 I was hanging around with like minded souls in Southall and was invited to join a local band called The Screaming Idles (soon to be renamed as Nervous System) as they were looking for a vocalist. Over the next 18 months or so my time, effort and passion was invested here although, after endless rehearsing, we only managed half a dozen gigs. By the time this phase ended my own aviation interest was very much on the back burner although I did attend the 1983 International Air Tattoo at RAF Greenham Common, which was a bizarre experience in view of the anti-cruise missile demonstrations outside and I was walking around with a Killing Joke t-shirt on ! 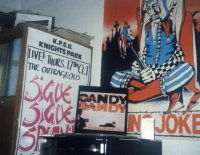 Again throughout 1984/1985 I was far too busy enjoying myself then to go off looking at aircraft but one fateful May day in 1986, I started to dabble again, mainly fascinated by the regular arrival of mysterious Iraqi Airways Ilyushin IL-76 cargo aircraft at London Heathrow. Ironically, this rebirth of my interest occurred just as I was about to get married to Deborah.

In the Cold War climate, there was plenty of activity in the UK to keep the aviation enthusiast happy and regular days out up the A1M & around the South East ensued. I guess in hindsight, my temporary relocation to Peterborough (July 1987 to March 1988) rather fuelled my aviation interest, especially as I joined the newly formed EEAG (East Of England Aviation Group, producers of the Strobe magazine) as member 002. Later that year, as my marriage broke up, aviation went briefly on the back burner and music took over again. Juggling three major passions in one's life (music, football & aviation) always causes a few problems & by 1989 into 1990 I had joined another band, but this time as a second guitarist. Initially called Genius Move, the name changed a few times before we finally settled on Pleasure Corps before the first of half a dozen gigs. From 1990 to 1993 I was going to at least one gig a week (up to 80 a year) but as the bands faded away and my attendance tailed off I then moved to Isleworth, I got bitten by the travel bug and this is where the aviation interest really took off again.

I guess the 18 day Touchdown Tours trip across the USA (Apr/May 1994) moved things to another level. The following year I went to an airshow in Moscow and after further trips to the US and across Europe, I finally went to Poland in August 1998 to attend the Polish AF 80th anniversary airshow at Deblin. The former Warsaw Pact countries were now easily accessible & very receptive to the aviation enthusiast so further successful trips were made across Poland, Czech Republic, Slovakia and Hungary. This included a memorable trip to the DOL 2000 road exercises on the Kliniska highway in Western Poland.

Ironically I had planned to take the Touchdown Tours trip to Greece in November 2000 (which was a roaring success) but following the death of my father from cancer in September that year, aviation was not something I was really thinking about. During the summer of 2001, I had reserved a place on another trip back to Poland but this was cancelled and therefore I transferred the Ł100 deposit over to the Greece trip, in view of the two previous trouble free trips. It had been a toss up between Greece and Romania (which was staging a big airshow) but the prospect of a nice warm break in early November won the day. After the well documented 9/11 events in New York, I expected that our permission to attend the Hellenic Air Force "Open Days" would be revoked, so was quite surprised when the tour still took place. The rest, as they say, is history.